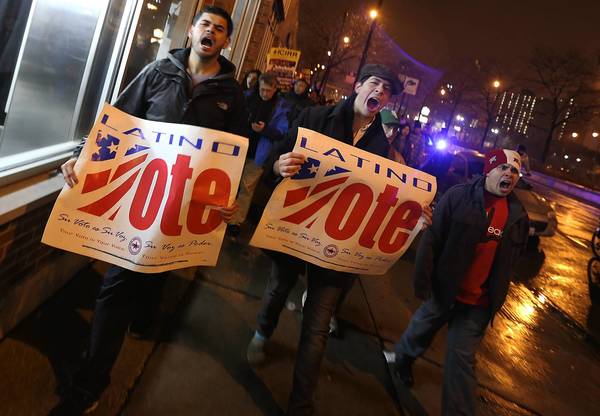 The outsized role that Latino voters played in securing victories for President Obama and Democratic Senate candidates has energized the effort to rewrite America’s immigration laws, but opposition in Congress, particularly among House Republicans, remains a significant hurdle.

In his election-night victory speech, President Obama specifically mentioned "fixing our immigration system" as a priority — along with reducing the deficit, reforming the tax system and reducing the country’s use of imported oil. Latino leaders made clear they planned to hold Obama to that, noting that the president had promised in his 2008 campaign to push for reform but did not deliver.

"No more excuses, no more obstructions, we want action," Eliseo Medina, the secretary-treasurer of the Service Employees International Union and a prominent strategist among Latino political leaders, said in an interview.

Unlike 2009, when Democrats shied away from a congressional fight over reforms that would have created a path to citizenship for some illegal immigrants, the political dynamics in the coming year favor aggressive moves by the White House and the Democratic leadership.

Latinos were the only large demographic group that supported Obama more heavily in 2012 than in 2008, according to data from exit polls. The president won 71% of Latino votes, compared with 27% for Republican Mitt Romney, bettering the 67% Obama won four years ago.

In addition, Latinos represented a bigger share of the electorate this time. All told, Obama probably netted at least 1.4 million more Latino votes this year than in 2008, the exit poll data suggest.

The increased vote provided his margin of victory in several states, including Colorado and Nevada, and also helped the Democrats win several close Senate contests. It gave Obama a similar margin in Florida, where he is leading but the result is still undecided.

"For the first time in United States history, the Latino can claim to be nationally decisive," said Stanford University professor Gary Segura, one of the principals of the polling firm Latino Decisions, which extensively surveys Latino voters.

In addition to repaying an electoral debt, Democrats have another motivation for pushing immigration reform, party strategists acknowledge — the issue deepens an already significant division among Republicans.

One group of GOP strategists and elected officials argues that the party risks disaster if it fails to reach out to the fast-growing Latino population. Sen. Marco Rubio of Florida and the state’s former governor, Jeb Bush, as well as prominent figures associated with former President George W. Bush all have made that argument.

Romney made that argument himself during the secretly videotaped speech to supporters in Florida in which he made his now-famous remarks about not being able to appeal to 47% of Americans.

"If the Hispanic voting bloc becomes as committed to the Democrats as the African American voting bloc has in the past, why, we’re in trouble as a party and, I think, as a nation," he said.

Many Republican strategists say that moment already has arrived. "There’s no more time left demographically to be tinkering at the margins, doing window dressing like they have for 20 years," said Mike Madrid, a Republican campaign consultant based in Sacramento. "That’s not going to work anymore."

Surveys by Latino Decisions and other polling firms have shown that immigration is a make-or-break issue for many Latino voters, including Puerto Ricans and Cuban Americans who are not directly affected by the debate. Even though more Latino voters might side with the GOP on other issues, the party’s stand on immigration helps create an image of hostility, the polling shows. An analysis of exit poll data by the Pew Hispanic Center showed Obama tied Romney even among Cuban American voters in Florida, who have long been a source of strength for Republican candidates.

"Republicans need to make this go away" before they can attract new voters, Segura said.

On the other side, many Republican members of the House, whose districts often include few Latino constituents, fear a backlash if they move toward compromise on immigration policy. Many of the party’s most loyal voters vehemently oppose anything that they consider "amnesty" for illegal immigrants. But a provision that would allow at least some illegal immigrants to achieve citizenship is a minimum requirement for major Latino groups.

Opposition within Republican ranks led to defeat of the last attempt to push a large-scale immigration reform package through Congress in 2007.

That bill, proposed by President Bush, would have created a guest worker program, increased the number of agents patrolling the border and created a path to citizenship for young people brought to the U.S. as children, among other provisions. Conservatives denounced it while labor unions objected that the plan would bring thousands of low-wage guest workers into the United States.

In 2009, Obama White House aides and Cabinet officials spent months hammering out a framework for reform in closed-door talks with Senate Majority Leader Harry Reid (D-Nev.). But Reid’s vote counters saw a difficult midterm election on the horizon and couldn’t get enough Senate Democrats to get on board; the effort never saw the light of day.

Any new effort to pass immigration bills will face similar head winds. Democratic vote counters say that at least seven senators on their side who represent states with few Latino voters are reluctant to vote on the issue. Several Senate Republicans who have supported reform efforts in the past, including Lamar Alexander of Tennessee and Lindsey Graham of South Carolina, are up for reelection in 2014 and could face primary challenges if they stray too far from party orthodoxy.

The outlook in the Republican-controlled House is even tougher. In an interview with reporters this fall, Rep. Kevin McCarthy (R-Bakersfield), the third-ranking member of the GOP leadership, said a majority could not be put together in the House for any sort of comprehensive immigration package. At best, the House would be able to pass smaller pieces of legislation tackling the less controversial aspects of immigration policy, he said.

Advocates for immigration reform say they plan to work with business groups to try to put pressure on Republicans to shift their position. The business community is "ripe" to jump into the immigration debate, said Sen. Robert Menendez (D-N.J.), citing support from a wide array of business groups including high tech, the restaurant and hotel industries and agriculture.

"If we create movement in the Senate, I do believe there are Republican members in the Senate who will work with us," he said. "Then that all gets driven and placed in the House’s court."

At the same time, Latino leaders made clear they opposed a piecemeal approach.

"We need to fix immigration reform once and for all," said Ben Monterroso, national executive director of Mi Familia Vota Education Fund, a labor-backed group that was deeply involved in registering new Latino voters in swing states.

0 0 0 0 0
Previous : Immigration Reform Effort To Begin In Senate Post-Inauguration
Next : Latinos to serve in State Legislatures of 36 States