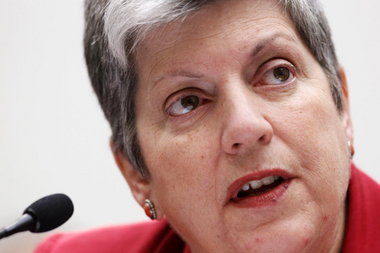 The comments from Homeland Security Secretary Janet Napolitano throw into question the ultimate effectiveness of Alabama’s crackdown on illegal immigration, which allows local police to detain people who are in the country without permission. If the federal government doesn’t follow through and deport them, they stay in the country.

At a hearing before the House Judiciary Committee, Napolitano was asked by U.S. Rep. Bobby Scott, D-Va., if DHS was "working with Alabama" to implement the law, in which Alabama officials ask people for proof they are here legally.

"Not in that sense. We have been working with the Department of Justice on its challenge to that law," Napolitano said.

The U.S. Justice Department has sued the state, saying the law is unconstitutional and interferes with the federal government’s enforcement of immigration laws.

Some sections of the Alabama law have been delayed by judges; others are in force. The state does not keep track of how many people have been detained since the law went into effect about a month ago. Jefferson County District Attorney Brandon Falls said no cases have been brought to his office under the new law.

On Friday, the Alabama District Attorneys Association will hold a meeting for prosecutors in hopes of developing a blueprint for statewide training for law enforcement. Executive Director Randy Hillman told the Associated Press that many local agencies still aren’t enforcing the law because of uncertainty over exactly what it says.

But Napolitano’s comments on Capitol Hill were met with additional frustration by the law’s advocates. Alabama House Speaker Mike Hubbard of Auburn said they illustrate why Alabama passed its immigration law in the first place.

"Unfortunately, this is further evidence of the Obama Administration’s do-nothing attitude on the nation’s illegal immigration problem," Hubbard said. "I suppose we shouldn’t be surprised that the federal government won’t help us enforce our laws considering it hasn’t been enforcing its own law for years."

Members of Congress and civil rights advocates had asked DHS and the Immigration and Customs Enforcement agency not to deport people caught by Alabama’s new law unless they have prior criminal convictions. The federal government recently announced that, because it only has the agents and money to be able to expel about 400,000 people a year, it will focus its deportation resources on those who are a threat to others. It is estimated that there are more than 10 million undocumented people in the country.

"Given the human crisis that is currently unfolding in Alabama, there is no more important place to exercise the prosecutorial discretion that your agency so aptly clarified is available to those with strong ties to the United States and without a serious criminal history," Rep. Luis Gutierrez, D-Ill., wrote to Napolitano on Friday.

Rep. Zoe Lofgren, D-Calif., asked Napolitano Wednesday how the government would handle the case of an undocumented woman in Alabama who obtains library cards for her two U.S. citizen children, thus committing two crimes, and whether that would make her a priority for deportation.

"Well, the scenario you depict is not within our priorities," Napolitano said. "We will look at the cases individually, yes, as we will in other states, as well. Not just in Alabama."

Scott also said Hispanic citizens could be "adversely affected" because they have to show identification "about everywhere they go."

"I think that should be a real concern. You’re correct," Napolitano said.

Alabama’s Legislature passed the immigration law this year and described it as the toughest in the country. Advocates say the state is properly asserting itself because of the failure of the federal government to secure the border.

But opponents say it is hurting Alabama’s economy and image by driving Hispanics — legal and illegal — out of the state. Government services for all citizens also have been disrupted because of new requirements to check immigration status.