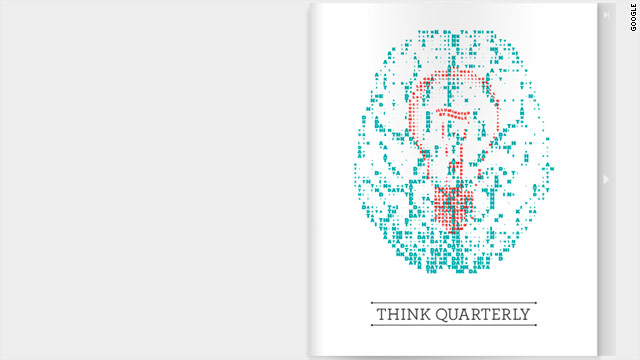 Many of Think Quarterly’s articles feature interviews with Google executives and technology leaders.

Google has quietly launched its own full-length online magazine, a quarterly publication whose aim is to create a “breathing space in a busy world.”

The first edition of Think Quarterly, based out of the UK, is a 68-page dive into the world of data and its impact on business.

The first thing most people will notice is that it’s a visually stunning piece of work. It’s a rich Flash app with Google’s quirky sensibilities and the in-depth writing you might find in BusinessWeek or Salon.

Google’s quarterly magazine is edited and designed by creative agency The Church of London.

The articles themselves are thought pieces about major business and technology topics from a variety of freelancers and contributors. Google was able to snag Simon Rogers (editor of The Guardian’s Datablog), Ulrike Reinhard (editor of WE Magazine), and other journalists for the project.

“At Google, we often think that speed is the forgotten ‘killer application’ — the ingredient that can differentiate winners from the rest,” Matt Brittin, Google’s managing director of UK & Ireland operations, said in Think Quarterly’s introduction. “We know that the faster we deliver results, the more useful people find our service.”

“But in a world of accelerating change, we all need time to reflect. Think Quarterly is a breathing space in a busy world. It’s a place to take time out and consider what’s happening and why it matters.”

It’s unclear whether the new online magazine is another sign that Google is entering the media business or whether it’s just a project to feed the company’s intellectual curiosity.

Google doesn’t describe its newest project as a magazine or a publication. Instead, Google calls it a book on its website and a “unique communications tool” on its Twitter account.

Regardless of what you call it, Think Quarterly is an interesting and informative experiment by the search giant.